Lady A are such a staple in the country music world, and I’m not sure they get enough credit for the longevity and the consistency they’ve had throughout their career. While they’ve adapted and grown as artists, they’ve never lost the harmonious spirit that makes them who they are as a group, and that speaks volumes. Georgia is home to Lady A’s Charles Kelley and Dave Haywood, and Charles even joked that at this point, we might as well consider Hillary Scott to be an honorary Georgian.

Their live show hits in all the right places. They have the jams, they have the slow songs, they have the songs you sing at the top of your lungs in the car, and they have the flat-out-fun songs. Their setlist just never let up the whole night. It really puts in perspective how many hits they’ve had.

Opening the show with one of their recent hits, “Like A Lady,” the lighting and stage design were top notch. There was a special energy in the air that night. A genuine appreciation to finally have live music back. You never know how good something is until it’s gone, and that’s exactly how we’ve all felt having concerts and other live shows “taken” from us by this pandemic.

One of the biggest surprises of the night was when the trio was joined onstage by surprise special guest Russell Dickerson. RD sang his hit song, “Yours,” before Lady A joined him to sing his song “Home Sweet” together. It definitely felt like the start of something new, and I wouldn’t be surprised to see more coming soon from Lady A and Russell Dickerson in the near future.

Later on, Lady A brought back out their openers Carly Pearce, Niko Moon, and Tenille Arts for a genre-blending medley that mashed up a variety of songs into one epic, energized medley. Lady A started the round off with Bob Marley’s “One Love” before Carly Pearce came in with “Piece of My Heart,” then Tenille Arts covered Dua Lipa’s “Levitating” leading into Niko Moon’s cover of “Shape of You” by Ed Sheeran. I know, the songs might sound like they wouldn’t work on paper, but in the moment — with all of the songs overlapping and the harmonies blending — it was electric.

The audience had the chance to lend their voice to the show during “You Look Good” after Charles Kelley shouted out, “We don’t have a horn section, so help me out, Georgia!” Then, he and the rest of the crowd proceeded to mouth the horn sounds from the song.

In one respect, the night flew by, and it was obvious that nobody wanted the music to end. In another sense, it felt like time stood still for that handful of hours. I don’t know if it’s because we’ve all been so deprived of the live music experience, but the night was special.

Carly Pearce has such a sophisticated voice with silky smooth, soaring vocals, and she really got the chance to stretch that voice during this live show. Don’t get me wrong, she sounds incredible on TV performing on award shows and late night talk shows, but her voice just has such a special quality when that perfect pitch is experienced in-person.

While introducing “Messy,” Carly addressed the elephant in the room when she said that the last few years of her life have been no secret. It was a really classy move on her part to take the narrative into her own hands while also setting up the song.

While she has plenty of her own hits and songs to fill the setlist, Carly also managed to squeeze in a few ‘90s covers including Shania’s “Man! I Feel Like A Woman!” and Garth’s “Ain’t Going Down.”

Pearce fills this niche and this void in mainstream country music right now with a sound that harkens back to the days of Dolly Parton and Loretta Lynn while still fitting into the landscape of today’s country. It’s clearly working, as she recently earned a nomination at the CMA Awards for Female Vocalist of the Year AND Album of the Year, after winning multiple awards for “I Hope You’re Happy Now” at the CMA and ACM Awards. She’s certainly having a record year.

Niko Moon is honestly ready to take on his own headline show, and it surprises me to think that this early on in his career. He has this contagious energy (I know something contagious at a concert is the last thing we want to think about right now, but it’s true!) that just fills the entire space.

In songs like “NO SAD SONGS” and “GOOD TIME,” Moon has this growl that comes out when he sings in his lower register. For the (very few) fans in the crowd that didn’t even know his songs, it was still so easy to love his set because of the vivacity and spirit he brings onstage.

This show was Niko’s hometown show, as he’s from Douglasville, Georgia, a small town about an hour away that doesn’t have much besides an Applebee’s and a TJMaxx, according to Niko Moon in his speech leading into “WAY BACK.”

One thing you might not know about Niko’s career is that he got his start in songwriting. He has written songs released by Zac Brown Band, Dierks Bentley, Rascal Flatts, and more and he even worked those tracks into his set for a mini songwriter’s medley featuring ZBB’s “Keep Me In Mind” and “Homegrown” and Dierks’ “Gone.”

Dressed in an all pink get-up, all eyes were locked on her when Tenille Arts paraded onto the stage. Even before she had a chance to sing or say anything, the crowd was entranced by her glittery guitar.

She had a setlist of heartbreakingly true songs that are disguised as fun little bops, so they connect with the crowd on a personal level while they’re also just fun to groove along to at the same time. Looking around, I saw that there were people yelling the lyrics along with Tenille. 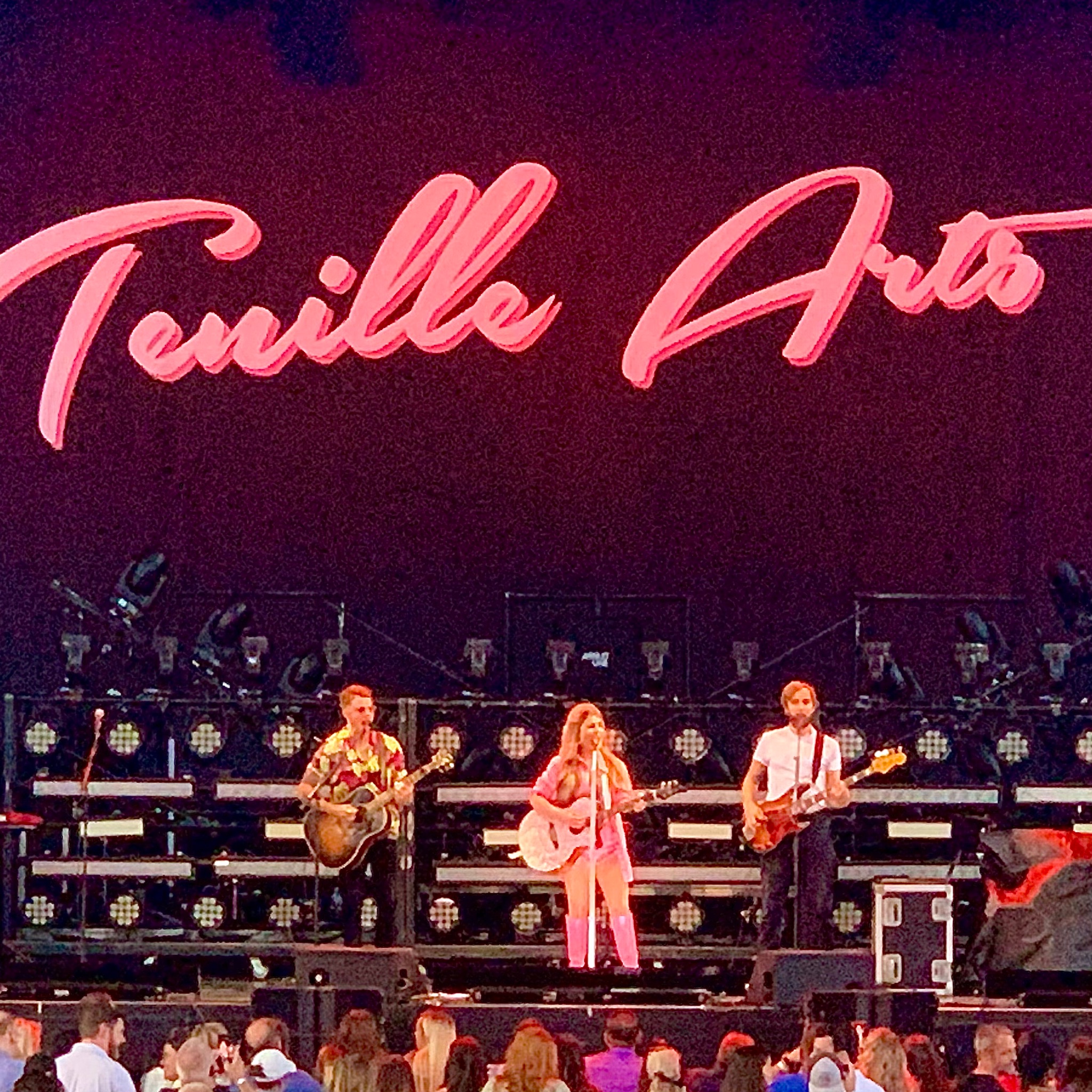 This set made me think of the early days of Kelsea Ballerini and Maren Morris. Her voice lends itself to future crossover success, and I could see her jumping on a Zedd track or doing a song with The Chainsmokers and it sounding really good. She has this bubbly personality that makes her immediately likable as a person, then she opens her mouth and that incredible voice pours out of her.

Check out Lady A’s new album What A Song Can Do when it drops Friday, October 22!